Read more about the life story of Ruby and share your memory.

Ruby Violet (Dunnihoo) Gaisford was born January 15, 1928, to Ross and  Clara (Hahn) Dunnihoo at Shattuck Hospital in  Shattuck, OK. She passed from this life on November 12, 2022.

Ruby was raised around the Shattuck area where she attended school.  During World War II, Ruby spent time writing letters to soldiers.  Her sister gave her Irvin Clifton Gaisford’s name to include in her letter writing, and after sending and receiving many letters, she finally met the love of her life the day Irvin came home from the war. They were married in a ceremony on June 1, 1946, in Ashland, Kansas.  To this union there were three children, Clifford Ross, Beverly Louella, and Dennis Irvin.  During 64 years of marriage, they resided in Ellis County except for 4 years living in Dumas, Tx, while Irvin worked at a gas plant.  While raising 3 children, Ruby helped dairying, farming, custom harvesting, and raising cattle. Irvin and Ruby enjoyed square dancing, checking cattle, and traveling to see their children.  After moving to Shattuck from the farm in the spring of 2007, Ruby enjoyed keeping her lawn and tending to her flower beds.  She also loved planting a garden and was particularly proud of her tomato and squash plants this year.  After Irvin’s passing in 2010, she became involved in the Shattuck Senior Center where she looked forward to her weekly game of “chicken foot” with all her friends.  Ruby always offered a smile, an encouraging word, and was a light to many. She was a member of the First United Methodist Church of Shattuck. 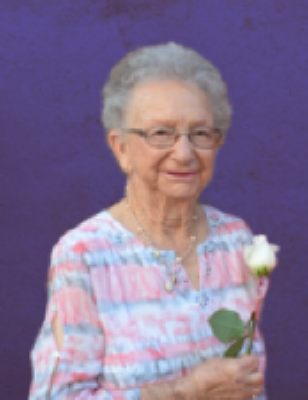